Middy’s are pleased to announce the continued support of Bryce Fullwood and Walkinshaw Andretti United racing team for the 2021 Repco Supercars Championship season as one of the WAU team’s co-naming rights partner.

Middy’s have been a long standing and continuous supporter of Bryce since his days in go-karts and are proud to continue this great relationship.

I’m really excited to be working with Middy’s again. They’ve supported me since my go-kart days, and I wouldn’t be here without them - Bryce Fullwood, Supercars Driver

Bryce now pilots a newly designed livery for the #2 Mobil 1 Middy’s Racing Supercar, which was revealed to much fanfare on the 27th of January, before the season started at Mount Panorama Motor Racing Circuit at the Bathurst 500 on the weekend of February 27-28.

The new look for Bryce's car sees the fresh pink and blue colour scheme on a gloss black base and the iconic bonnet position of Mobil 1 returns with Middy’s Electrical down both sides of the car.

It’s great to get the Mobil 1 Middy’s Racing car out there for everyone to see, we love the way it looks, even standing still. We look forward to an exciting year with Bryce, where he can continue his momentum and Supercar development. This young man has genuine speed, and we’re right behind him in converting that speed into heightened results - Bruce Stewart, WAU Co-Team Principal

Walkinshaw Andretti United has also announced Warren Luff as co-driver for the 2021 Repco Bathurst 1000. Luff re-joins the Team for an eighth season, fresh off the back of a 2020 Bathurst 1000 podium and will partner Bryce Fullwood in the Mobil 1 Middy’s Racing No. 2 entry.

Luffy has been a part of our family for eight years now. He’s the ultimate professional who never fails to do the job, no matter the circumstance. He’s been on the Bathurst podium four times with our team, and six times in total, which is just incredible to reflect upon. Importantly, he is going to be great for Bryce’s continual development as well, so I can’t wait to see what they achieve together - Bruce Stewart, WAU Co-Team Principal 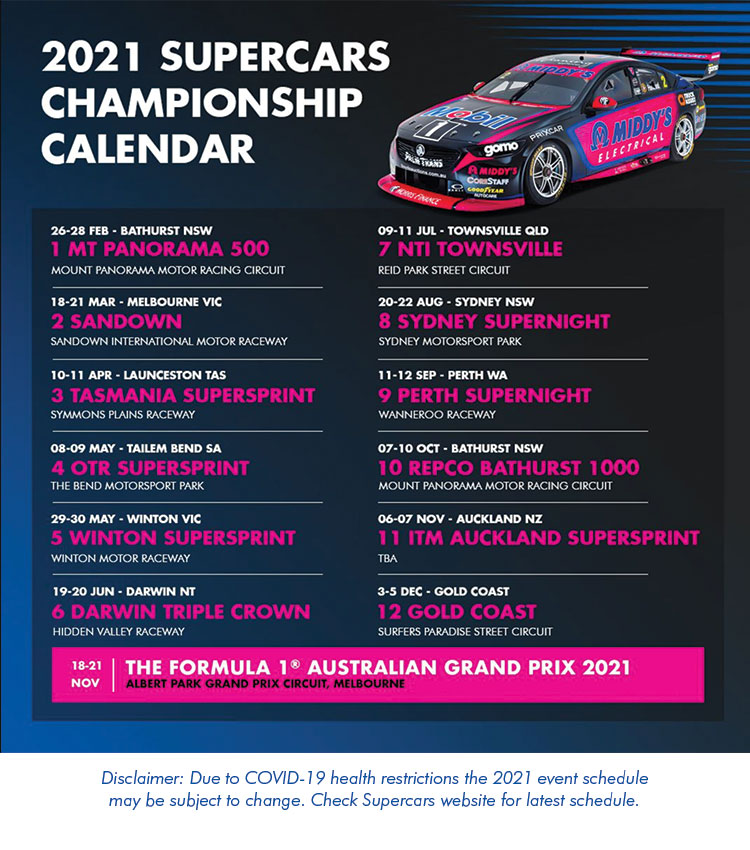 The 2021 Repco Supercars Championship Calendar kicked off at the spiritual home of Australian motor racing, Mount Panorama on the 26-28 February. The season will run between February and December and for the first time in it's history, the Championship will conclude with a spectacular finale on the streets of Surfers Paradise from 3-5 December.

The 2021 calendar is a big win for fans and viewers following the challenges COVID-19 presented in 2020 with racing returning to Perth, Tasmania, Victoria and New Zealand. Every practice, qualifying and race session will be broadcast live in 2021 on Fox Sports and Kayo and six events will be broadcast on the Seven Network.

To get the blood going for the 2021 season, the Mobil 1 Middy's Racing team in conjunction with Walkinshaw Andretti United, hosted an exclusive VIP Ride Day for some of our valued customers on 3 Feburary at the Phillip Island Grand Prix track.

The exhilarating experience was not for the faint hearted, with Bryce reaching speeds up to 250km/h in the 2021 Mobil 1 Middy's Racing Supercar.

Decked out in the latest range of merch. our guests certainly looked like part of the WAU team on the day. You too can get geared up with new 2021 racing merchandise which is now available at your local branch with exclusive pricing for Middy’s customers. Speak to your local branch manager for more details but be quick as there are limited sizes available, while stocks last.

To follow Bryce check out the latest Mobil 1 Middy's Racing updates and follow all the action on our socials.

Keeping Jobs and profits in Australia