It is with deep sadness that we mark the passing of Mr Hugh Middendorp.

Hugh had a pivotal role in the foundation of Middendorp Electric Co P/L from its inception, working with his father and brothers, Peter and Nick, firstly in the Middendorp manufacturing plant in Preston in the 1930s. Together they progressed the business into the new millennia and grew Middy’s into Australia’s largest independent electrical wholesaler.

Hugh was well known and greatly respected throughout the electrical industry. He loved Middy’s and all that made it the special place that he and his brother Nick worked tirelessly to create. His impact on the business has been profound and he leaves a legacy that his son, Nicholas and nephew Anton have continued. The fourth generation of the family is also very active with Nicholas’ son, Ben, now in his fifth year working at Middy’s. Hugh was proud of Ben’s involvement.

Mr. Hugh, as he was known around the office and to many suppliers, touched the lives of many who knew and worked with him, and as his legacy lives on, the greater family at Middy’s pay our respects and will miss him enormously.

His last official business appearance was the opening of the new Oakleigh branch on 19 June 2020. He also got to see the video of the Melbourne branch refurbishment. Two of our earliest branches, both very close to his heart. 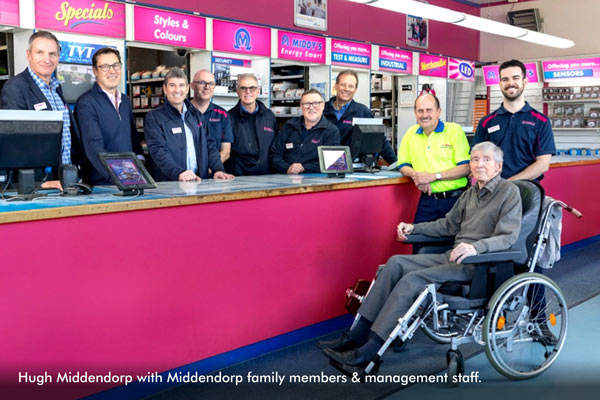 Keeping Jobs and profits in Australia